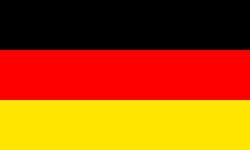 This LibGuide is meant to serve as a research help for all things German. Explore the tabs along the top of this guide for links to finding info in many different areas.

Germany's native language is Deutsch. A large country in Europe, Germany is one of the economic engines of the European Union. West and East Germany reunited in 1990 to become the Federal Republic of Germany, or Bundesrepublik Deutschland. The population in 2015 was estimated close to 81 million. The climate is mostly temperate with some regional variations.

Deutschland.de: Your Link to Germany